That’s from a Marilyn Manson song! An old one, that I don’t think many folks know. It was a good song, from a great album. Currently, the pale giant is doing a lot of interviews, and they’re making it very challenging to defend my appreciation of the dude’s music. The AV Club couldn’t even get him to do their 11 Questions thing.

Good line, though. Here’s a monkey:

That pic’s not new, but here’s the same wee fellow in all his greenstuffed and painted glory! 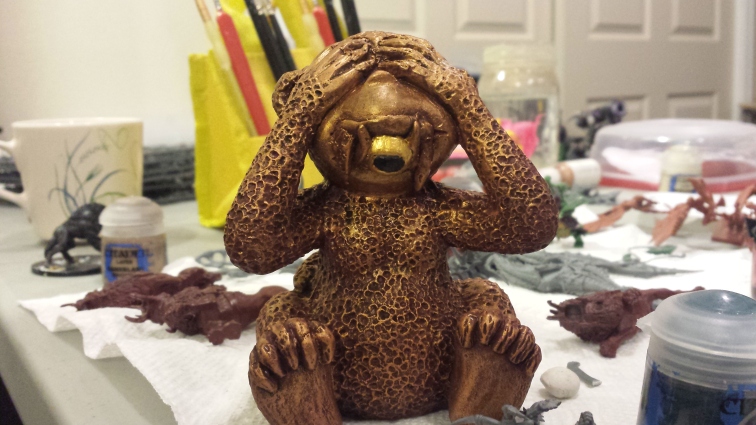 As always, there are things I could still do. For the monkey that’d mostly be some flecking with Blood for the Blood God, maybe grind in some grime and such. I admit, though, that I like him just being shiny and crude and textured and horrible. The goat eye (that’s the thing in his mouth) looks better in person; it’s also one of those touches, like my Keeper of Secrets giving the Agincourt Salute, that makes more sense to me than the majority of my opponents. Goat eyes are creepy. Super simply done; Primed in gray, then primed in Daemonic Red, touched up with Vallejo Black Red, then drybrushed with Gehenna’s Gold.

Oh, probably bears mentioning what the purpose of the statue is. He’s my Herdstone Shard for my Typhonic Beastmen. I’ve had great results with this in games so far, though if I was ever forced into using End Times magic I think that the benefit would be reduced. In standard games, though, running a couple low-level Bray Shaman next to the statue gives me a nice leg up in both magic phases, allowing me to push harder on the spells I need and throw out a couple easy-cheapies to run the clock. A lvl 4 Great Bray Shaman can drop a Wildform on one of my units on a single die once in three, though I generally won’t risk that failing. However, those spare dice are great for dropping the Shadow sig spell, and I’ve thought about experimenting with the Beastman’s special lore for the chargery (thought that makes positioning around the statue trickier.

Fluffily, the statue is He Who Sees Truth in Flesh, the idol my Typhonic Beastmen worship. That’s where the blood would come in, and I’ve also considered painting up a pile of offerings to throw at his feet. I like the simplicity of the figure, though, and love that I have something which simultaneously looks cool and isn’t the hot bullshit herdstones I’ve seen around the net (there are no rules, see, so some folks will bring a Watchtower-sized object or bigger, and since it blocks line of sight they hide an army behind it).

When he’s not in place, I sit him next to my Ganesha statue in my kitchen. It’s always important to keep our divinities close.