My wife and I played a game! Actually, we played two, starting with a 1k battle between her Orks and a combination of CSM and Daemons. 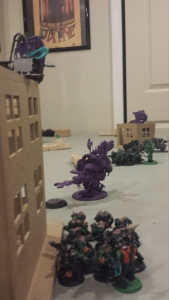 Note that, as we’d realize later, both of my wife’s lists are technically unbound (too many Heavy Support choices). I blame the fact that I mostly play Daemons, and thus barely comprehend what a Heavy Support is and pretty much they’re only massive robots and tanks. Flash Gitz, by comparison, feel like Elites to me, so I mentally count them as such. Especially since Tankbustas are Elites, but they seem like Orky Longfangs.

Anyway, her list is heavy on things she enjoys playing (except the Tankbustas, which we were trying for the second time–she was unimpressed, but we didn’t have a lot of targets for their Tankhunter USR and they spent much of the game locked in combat with my Nurglings).

To combat this, my list was simply a mix of some shooting and some stabbing. I’d never admit to letting my wife win, at anything, because I never let anyone win at anything. Doesn’t mean I don’t play, much of the time, in a way that makes beating me decidedly possible! 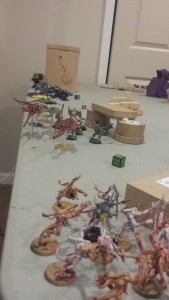 It’s a bit light on Troops, but 20 jump-pack bodies for less than I’d pay for 10 Bloodletters does a lot to fix that. I also originally thought that my Nurglings could infiltrate into some useful place; turns out, no! They essentially deployed exactly where they would have anyway, but they did do that aforementioned Tankbusta tarpitting.

We rolled Spoils of War (the one where you can steal the other player’s objectives) I had first go.

Top: At this point, the game took approximately one week to complete. Hence the “Presidents’ Day” above. Some of this was work and responsibilities, but a lot was that turn-one experience. I know the turn-one experience, I started out playing 500 points of daemons. I’ve played 500 points of daemons in tournaments, and that was before we had summoning.

The turn-one experience I’m describing is what happens when your army gets shot entirely to shit on the first turn, even when that’s not what actually happens. It’s a subjective sensory experience. It’s MKUltra with little plastic men.

I had a pretty decent shooting phase. I was able to throw some damage onto her Flash Gitz, despite both night fighting and their position in a ruin, because Noise Marines are good at exactly that thing. Being able to slap Endurance on them during the Psychic phase let me make them mobile while keeping their lethality, and it’s generally much better to have 4+ Feel No Pain than any sort of cover save. My Blastmaster shot deviated heavily off of the Gitz, slamming into her Bikerz instead and killing a couple. The Skull Cannon managed to inflict significant casualties on one of her units of Boyz, which took several slashing attacks from my Screamers as well.

However, you’ll notice I don’t mention all the awesome bodies I summoned. Which was a pretty key element of the list, in that I needed those bodies. I didn’t really build a list capable of actually getting those bodies, but I figured I could bunker down my horrors and have the Herald spew out some flesh. But not on turn one! On turn one, I figured I’d buff up some units and shuffle them across the board. Not only were my rolls bad–in part because I forgot the Spell Familiar–but I never got another chance to do any summoning. Because when the Shooting Phase started, I rolled a 3 on the Chaos Daemon table. Which meant that my only Daemonic character was also A) my summoner and B) my warlord. He exploded.

Still, the consequences of the shooting phase meant that my turn was on pause for the next several days, because when you’re sitting taking bullets it doesn’t feel like the game’s really in your hands. Eventually we picked back up, and my Furies jumped into a couple of fights, which went poorly for the most part! End of Turn 1 I score a point, so we’re tied. Because I blew up my warlord.

Bottom: On my wife’s turn, she shot many things with her much more impressive guns. She charged into my Screamers, amazing herself with how many attacks Orks can throw out in close combat. That fight ended fairly evenly, and would drag on for a while.

As you might imagine, going a week between the beginning of a game and the rest meant that the rest played out a bit more hazily. Also, some shots were involved. However, this happened:

The Deff Dread managed to wipe that unit over just a few turns, in time to trundle over and save the beleaguered Boyz from my dwindling stock of Screamers. That fight ended with all of my Screamers dead, one wound on the Dread, and this superb badass:

So the right side of the table fell pretty neatly into my wife’s hands. My Pink Horrors were still around, but against Orkish armor their S5 shooting wasn’t much of a threat. I funneled most of my Warp into the Sorcerer and his unit of Noise Marines. I managed to wreck most of her Flash Gitz with them, while the Nurglings finished the job the Furies started and chewed their way through the Tankbustas. My Noise Marines also managed to shoot the bikers off of the table and stab the remainder. My Skull Cannon wrecked most of the remaining Boyz from the other unit, charging what was left.

Then the Gorkanaut got to me. I actually managed to stay out of its actual claws for a couple of turns, losing marines to the waves of MegaShooting. What happens when a Gorkanaut charges 2 Noise Marines and a Chaos Sorcerer?

That was pretty well the end of the game. I should point out that one of my Fury units lost a battle by 1 point and rolled a 12 on Instability, killing 7 or so models in a single swoop.

Because, you know, they owed me…

I rolled a 12 on the Chaos Daemon table. I’ve actually never done this!

I pulled in a decent 12 Plaguebearers, deep-struck them on the ruins in the top corner of the board because by damn I planned to have the head of that Rokkit Boy.

She was able to block my efforts with her Deff Dread, and I had to choose between a split assault or getting extra attacks on the Dread. I went with the latter, and thus the Boy escaped my grasp. I lost the game soundly, by about six points.

Early-turn frustrations aside, it was a great game. Terrible dice alternated with amazing rolling on both sides…my wife nailed every leadership check she was asked to make, regardless of the penalties on the rolls. Not long after we finished, she turned to me and asked: “Wanna do 1500?”